When you bring together a volunteer with time, a big heart, and mad math skills and a student in need of academic assistance, great things can happen!

There’s nothing worse than watching your child struggle in school, but that’s exactly what Afaf experienced with her son Elmahdi at the beginning of this school year. For Elmahdi, a fourth grader with brittle bone disease, math was a challenge in school. Unlike other fourth graders, his bones and joints hurt a lot, he got tired quickly, and he often had to miss class as a result of his condition. When Elmahdi was able to go to school, he would get C’s on many of his math tests and he found it difficult to concentrate long enough to learn material in class. 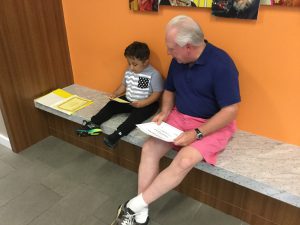 Because of Elmahdi’s difficulties in school, Afaf contacted APAH resident services and set up tutoring sessions with a volunteer. John, Elmahdi’s tutor, practiced math problems with him that were provided by Elmahdi’s school, so the work they were doing was relevant to his class. They also reviewed problems on tests that he missed or didn’t understand.

John soon realized, “Elmahdi is very quick. And he loves learning, he loves being ahead.” As John got to better understand his fourth grader’s competitive nature in learning, their sessions began to develop a mindset of “we’re not leaving this until you know how you got the right answer.” This fostered Elmahdi’s understanding of basic math concepts and helped him apply these on practice problems. Additionally, because one-on-one tutoring was more personalized to Elmahdi’s challenges, they were also able to take breaks when he got tired. Therefore, his lessons were able to balance learning with his personal needs.

As soon as Elmahdi started working with John, his grades shot up. Afaf remembers, “On the first test he got an A, then an A+, then A, A, A.” John attributes this newfound success to Elmahdi’s work in tutoring sessions, because “he just had more practice, he was more confident, he took his time.” During their lessons Elmahdi wasn’t afraid to ask questions and was able to focus on math without being distracted by his friends and classmates. They usually met twice a week during Elmahdi’s after school program at a local community center, but they would find a separate, quiet space where they could concentrate. Elmahdi’s one-on-one lessons were the perfect place for him to show his curiosity and eagerness to learn.

Tutoring was not only rewarding for Elmahdi, but also for his family and for John. John loves seeing his incredibly bright student succeed in school, especially since he was able to give Elmahdi the extra support he needed. “Elmahdi’s doing the work, I’m just trying to coach him,” said John, “It’s a very trite old saying, but you know, you receive more when you’re giving than you ever gave.”

Afaf is also absolutely thrilled with Elmahdi’s improvement in school. She said that she highly recommends one-on-one tutoring because it truly helps students understand more. “It worked for Elmahdi,” Afaf gushed. “It worked so great, and I am so blessed that we have John in our life and in Elmahdi’s life. He’s a godsend. He’s amazing.”

UPDATE: Since this story was written, Elmahdi received a certificate from his 4th grade teacher at the end of the 2017-2018 school year for “Hardest Worker in Math”! Congratulations, Elmahdi! And thank you John for your volunteer service!