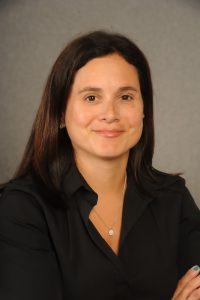 Yesterday I had an important conversation with a fellow co-worker who asked me if I identify as a minority leader. It was a simple and honest question that provoked a range of emotions for me on the first day of Hispanic and Latino Heritage Month. Frankly, being Latina has defined me every day of my life–before I was a wife, mom, and now nonprofit CEO. The question seems to be asked more of me in recent years and I wonder if it is because people are not used to seeing a Latina in leadership roles. While it may seem shocking, I have been asked, “are you really Latina?” or “are you Latina enough?” as if I need to provide proof. I am glad that my colleague asked the question as it prompted me to stop and want to give an answer, especially this Hispanic and Latino Heritage Month.

My parents—Oscar and Sara Fernandez—came to the US on July 3, 1965, in their 30’s, without money and unable to speak English. They settled in Queens, New York and immediately had my sister, Helen, then me a few years later, followed by my brother, Oscar Jr. Initially, we lived in our little world upstairs from my dad’s medical office where he treated immigrants, mostly Latino, for over 50 years. We only spoke Spanish at home. I still remember arriving at school for kindergarten and feeling overwhelmed as I was pulled out of the classroom to receive special support since I was so behind in speaking and reading English. My parents worked all the time as their business required them to have both daytime and night walk-in hours for their patients who were primarily working immigrant families. In the summers, my sister and I were sent to Colombia to live with my aunts in rural Arjona, outside of Cartagena, where my dad had grown up. He was one of 11 kids on the family farm and the only one to graduate from elementary school. To receive an education, he went to the seminary in Cartagena, but left before his vows when he realized he wanted to study medicine. My abuela was a force of nature herself, having raised five young children on her own after a drunk driver killed her husband.

My parents worked hard to provide me and my siblings every opportunity to succeed in the US, and to them that path to success was getting an education. While they never went to a parent-teacher conference and could not help with homework because of the language barrier, they instilled in us a work ethic and confidence that we could succeed in anything. My sister went on to study medicine, including two years in Mexico so she could continue my dad’s legacy as a Hispanic doctor serving the community in New York City. When it came time for me to pick a major at Georgetown University, I gravitated to Latin American studies to make sure I continued my connection to our heritage. As I look at my kids now, I am touched that my middle son has also decided to pursue Latin American studies in college. He currently leads the Latin American Student Organization at his high school to celebrate the culture he has learned about from me and my 90-year-old father, who is a big fixture in our lives.

As I approach my work at APAH today, many of our residents are like my family—immigrants with children who are looking to live the American Dream. I observed firsthand how hard parents worked to bring stability and opportunity to their kids and I know the drive of an immigrant daughter working hard to honor her parents’ sacrifices. When I hear my dad talk about his experience moving to the US, he often says he succeeded because of the kindness and support of others he met along the way. I believe APAH embodies what that community of support can be on a larger scale.

So, to answer my colleague’s simple question, yes, I am Latina and identify as such with every drop of my blood. While I am no longer a child living in an immigrant household in Queens, I am blessed to have a seat at the table now and can work to give other immigrant families the same opportunities that I was given by my parents. Among my allies, I am lucky to work with others on the Virginia Latino Advisory Board who all devote their volunteer time with me to raise up contributions and ways to improve the lives of the 800,000 Latinx community members who live in the Commonwealth of Virginia.