Doris C. has been a resident at Courthouse Crossings for four years. Originally from Tennessee, she grew up in California and moved to Virginia when she was 12 with her three youngest siblings. She went through the Arlington school system and eventually attended Edison high school and then NOVA to study photography. After school she got married and began her life with her husband; however, after 10 years together, their marriage ended. Even before her divorce she and her husband were living paycheck-to-paycheck. Doris admits they didn’t have savings and were not prepared for a crisis of any kind. “At this point, I am at my lowest,” said Doris. “When you go through a divorce, you start losing everything. I remember selling one of our cars just to pay my rent for one month- $1500.”

Over the next two years, Doris went through a difficult transitional period. She began a problematic and often abusive relationship with the eventual father of her two sons, now aged 6 and 7. While dealing with this relationship, Doris was in-between housing, going from time on her sister’s couch to various shelters and temporary arrangements. Doris eventually ended up at Doorways’ Shelter for Women & Families. Entering the shelter at five months pregnant (and with a one year old in tow) she didn’t know what to expect. “Doorways was a great experience. They allowed me to live my life, visit my sister, and have the time to get myself together.” While many shelters have a 30-day stay limit, Doorways allowed her to stay for four months. She felt she was able to finally research resources and understand how a housing grant could help her get independent housing for her family. 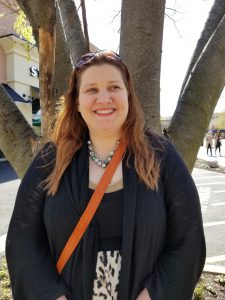 After receiving a housing grant (plus security deposit and additional support from A Woman’s Choice) and securing an apartment in the Westover neighborhood, Doris said things finally felt settled. However, her grant only covered a portion of her rent, and the costly reality of even a one-bedroom apartment was still an issue. Thankfully, she learned about affordable housing from her sister and discovered APAH. She loves being able to raise her boys in the Arlington community. “You can live your life like anybody else. I don’t get stuck into a stereotype like I have been before.”

This summer, Doris is looking forward to a move into Parc Rosslyn, another APAH property. Doris was born with an extra bone in her foot, leading to many attempted remedies and failed surgeries that have left her with affected mobility and chronic pain. Because of this, she has limited ability to work and is on disability. Parc Rosslyn offers an elevator to help with these mobility issues and a washer and dryer in unit, another critical need for her family. She gave a lot of thought to relocating, as she knew she wanted a place where her boys could be comfortable until they’re grown and ready to move out. “I want them to go to college, for sure.”

Doris herself is also considering college and may return to pursue her bachelor’s degree. “I’m interested a little bit in a lot, so I’m not sure what I’ll study. But it’s healthy for your brain to keep it going!” In her downtime, Doris enjoys crafting- specifically making holiday sweaters. She finds materials on clearance and at dollar stores, and has even had them sold at Buffalo Exchange, a second-hand store, in Washington D.C. All-in-all, she feels like things are finally peaceful and steady for her and her boys. “I feel so grateful. I’m happy right where I am now.”