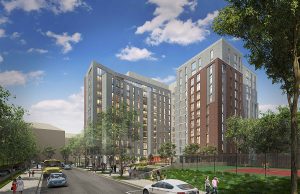 Arlington for Everyone: Demand for Affordable Housing

The demand for affordable housing in Greater Washington far outpaces the supply. In Arlington County in particular, the supply of rental units for low- and moderate-income families has plummeted over the past 20 years. Over a 13-year period, the county lost roughly 13,500 market affordable units due to rent increases, condo conversions, and redevelopments. Those units served households earning less than 60 percent of the Area Median Income (AMI), which in Arlington, is $77,400 a year for a family of four. That means that families earning $46,400 or less, which include childcare providers, firefighters, nursing assistants, and bus drivers, are having an increasingly hard time finding a place to live in the community they serve. Arlington County estimates that nearly 14,000 more affordable units will be needed here by 2040.

Learn more about the demand for affordable housing

When the Arlington County Board launched the Western Rosslyn Area Planning Study (WRAPS) in 2014 to create a bold, fresh vision for the area, APAH played an active role in the process. APAH Executive Vice President Carmen Romero (soon to become APAH’s executive director) served on the County’s WRAPS Working Group assigned to create an area plan and implementation recommendations.

Originally, WRAPS envisioned the use of more than one million square feet of commercial and residential space to include a new Arlington Public School, a fire station, market rate housing, and public space. Through strong advocacy, community engagement, and collaboration, APAH pushed for increased density on the land and gained the necessary approvals to include an existing 39-unit garden style apartment complex into the proposed Area Plan. With support from current residents and community members, the plan was changed to include the redevelopment of APAH’s existing apartments into a new 12-story property with 249 units of committed affordable housing.

With most affordable housing projects, layered financing is required to form the appropriate combination of debt, tax credits, equity, grants, and other tools. APAH carefully and creatively structured the Queens Court deal by drawing on a range of Virginia Housing programs. APAH was awarded 4% and 9% low-income tax credits used to generate $43 million in tax credit equity (purchased by Bank of America as equity investor); accessed long term taxable and tax-exempt loans totaling $28.5 million, including $19.05 million in low-interest loans through the REACH and REACH Plus programs; and leveraged short-term tax-exempt construction financing of $16.4 million.

Arlington County provided $16.7 million in the form of a soft loan funded from its Affordable Housing Investment Fund. Other project funding included a VA Housing Trust Fund Loan of $700,000, $500,000 from the Federal Home Loan Bank – Atlanta Affordable Housing Program, and an APAH sponsor loan of $15.94 million. This unique project used its resources to improve affordability and, because it came in under budget, used the cost savings to provide free internet to residents.

The construction of Queens Court was a three-year effort requiring significant planning and coordination with existing residents. The original structure housed 39 garden style apartments with a mix of one-, two- and three-bedroom units. That structure was demolished to build the new, 12-story complex with 249 units. The new Queens Court includes studio apartments, as well as one-, two- and three-bedroom units. APAH began communicating with tenants about the redevelopment plans in August 2016. A tight-knit group that shared a true sense of community, the residents were actively engaged and involved in the planning process. Many served as advocates with their neighbors, ensuring that everyone in the community was aware of next steps and options.

In August 2017, APAH’s relocation team began working individually with each household to establish relocation plans. APAH offered the options of being placed on a waiting list to be temporarily relocated to nearby APAH properties, including Park Rosslyn, Marbella, and Courthouse Crossing; or terminate their leases, enabling them to move to any affordable community in the area. The Arlington Tenant Assistance Fund was available to support those who faced higher rents when relocating.

In addition to the standard 120 days required for tenants to move out, APAH provided 60 more days, so tenants had about six months to secure new housing and move. Families began moving in late 2018. APAH covered costs for packing and moving, offering residents the options of a relocation payment to cover their costs or for APAH to hire movers on their behalf.

When Queens Court construction was completed in June 2021, residents were again offered the option to remain in their existing homes or move back to the newly redeveloped property.  As of June 2021,

A Place to Play: Public Park and Open Space

As part of the Queens Court redevelopment, APAH provided an easement to the County to construct and operate a public playground on top of the property’s parking garage. APAH coordinated with the County on the design of the garage to ensure it would be compatible structurally with their plans for the park above.

With the provision of open space, Queens Court open to the broader community, and accessible by multiple modes of transportation including metro.

Getting Around: Transit-Oriented Development

Queens Court Apartments—located near Lee Highway, I-66, and Wilson Boulevard—is a transit-oriented development conveniently located within a quarter mile of the Rosslyn Metro station and just minutes from Court House Metro station.

The Rosslyn Metro Station serves the Blue, Orange, and Silver lines and is a major transfer point for locations to the south in Arlington County and the City of Alexandria, west in Fairfax County, and north in Washington, DC. The station is also served by 16 bus routes including buses provided by WMATA (Metrobus), Arlington County Transit (ART), Loudoun County Transit, DC Circulator, and Georgetown University (GUTS). Most of the routes are bidirectional and have service throughout the day. Queens Court is designed to encourage easy transportation, whether walking, biking, or commuting. The property offers a total of 150 parking spaces for cars and 100 for bicycles.