Before the pandemic, Bernard was a project manager for a security company that is contracted out to DC charter schools. School closures dramatically cut the hours he worked and qualified him for pandemic unemployment benefits, which allowed him to get by. Even today, he is only working about three hours a day.  Although the pandemic left Bernard partially unemployed, he feels thankful that it also gave him the time and push to begin his life-long dream of owning his own business. 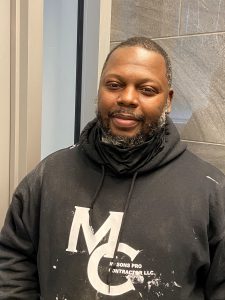 His love and skills for home-improvement projects began when he attended Phelps High School in DC. There he learned carpentry, painting, plumbing, tiling, and other related skills. After graduation, he began some college courses and he worked for the DC Police Department. But, when his father became ill with cancer and needed a caregiver, Bernard stepped in and was unable to continue down these paths. Instead, he used his skills in home-improvement to take small repair jobs whenever he had the time. These same skills became useful again during the pandemic because as he described, “a lot of people are home now, looking at their walls, they want upgrades and painting.” People began asking if he would be willing to do some home improvement projects and he agreed.

In a way, the pandemic provided Bernard a new opportunity, “I was able to take my skills and start making money for my family. I want to… get my licenses and get my business out there.” He’s growing his client base. His boss at the security company is providing mentorship and guidance. He’s working on getting his license in Virginia, Maryland and DC and is looking forward to being his own boss.

Although Bernard was born and raised in DC, he really loves Arlington, especially his home at Gilliam Place. “I love it! I can walk all the way to the Giant, get exercise, if I want something to eat, I’m surrounded by everything, so I love it.”

Opportunities to interact with fellow Gilliam Place residents in elevators and in other common areas are difficult due to COVID restrictions but he’s still found ways to make friendly conversation whenever it is possible. He recounts that during the holidays, he was touched by the Arlington Presbyterian Church (APC) outreach and gifts that they gave everyone in the building. (APC is located on the ground floor of Gilliam Place Apartments.)

When not working, Bernard spends time with his seven children and volunteers as a middle school football coach in DC. He mentors the players and over the years has seen several of them reach the NFL! With things opening back up in Arlington, he looks forward to becoming engaged and more involved in the community. In the future, Bernard hopes that his business will be successful and enable him to purchase his own home. After the pandemic, he’s looking forward to going to the movies, going to museums, and attending concerts.