Nearly sixty years ago in Ghana, Gertrude learned about her arranged marriage through a call from her grandmother, telling her to come down to the village to meet her future husband. She knew of Emmanuel – a fellow teacher and a neighbor -and had faith in their parents for recognizing their compatibility. They married shortly after meeting, leaving her uncertain in the early stages of their relationship.

Even after they were married, Gertrude didn’t immediately move in with Emmanuel. She was nervous to meet with him and always brought her younger brother to mitigate the awkwardness. “I was so naïve and didn’t know anything about marriage. When the two of us met, we sat down in silence. I don’t know what to ask, what to tell him,” she recalled. 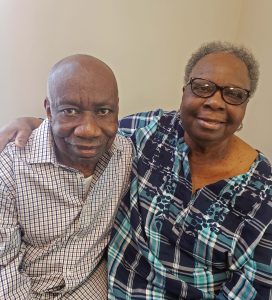 “When are you going to come without your brother?” he eventually asked her, baffled by his recurring presence. It took Gertrude time, but the day came when she recognized Emmanuel’s patience and kindness and she decided to trust her new husband unconditionally. “We have never had a problem since then. We are friends. We laugh together, cry together, have fun together.”

Eighteen years later, Gertrude came to America to visit her sister living on Columbia Pike. She liked the area so much she knew it was where her kids should grow up and she and Emmanuel should grow old. She stayed with her sister while she requested green cards for her husband and children. Her sister moved to Fairfax while Gertrude stayed in Arlington in anticipation of her family’s arrival.

Her family joined her in Arlington, where they raised their six children – five boys and one girl. Emmanuel initially worked in retail and would later work in other service industry jobs. Their kids thrived, and the family loved calling Arlington home.

After becoming empty-nesters and Emmanuel’s retirement, they moved into their only daughter’s home. For four years they lived with their daughter’s family, until their grandchildren outgrew their shared bedrooms and needed spaces of their own. Gertrude and Emmanuel moved into APAH’s Arna Valley View Apartments where they stayed for seven years, a relieving find since they were both retired and on fixed incomes.

They loved their community at Arna Valley View but were excited to move into Columbia Hills Apartments after the building opened. Gertrude uses a walker and appreciates the elevators and the ease of attending AFAC on the bottom floor. They still spend a lot of time with their family, who all live in the area. Family gatherings are always a large ordeal where every member is invited: they now have thirty-four grandchildren! It makes for many boisterous and happy occasions.

Across sixty years and a transcontinental move, they built their relationship on trust, love, and patience. And they found a community they love, too. They can continue to spend time in Arlington near their grandchildren because they have an affordable home.