Northern Virginia is the home that Jeremy* has always known. He currently lives at the Marbella Apartments. He went to high school in Manassas and returned to live in Arlington after serving eight years in the Air Force. While working full-time in the United States Air Force, Jeremy went to school and graduated from National American University with a computer information system degree, in addition to completing his associate degree in aircraft maintenance technology. 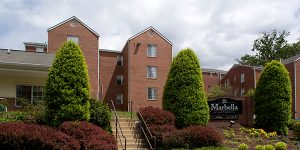 After he returned from serving in the Air Force, Jeremy decided to live outdoors while he bartended in Alexandria. For a while, he was living comfortably in a tent with a large backpack to hold all his possessions.

While out for a routine trip to a grocery store for food and supplies, Jeremy left his backpack outside, well-hidden nearby, so he could enter the small store without being disruptive. But after he finished his shopping, his backpack – full of everything he owned, including his identification – was gone. He never found it.

Jeremy was distraught by the theft of his most valuable belongings. He was especially caught off guard because he was between jobs and actively looking for work. Not only did he struggle to find work while he waited for the identification reissuances, but he was also unable to access and deposit his VA checks. Suddenly, Jeremy had no resources.

Despite years of hard work and professional credentials, Jeremy was homeless and needed help. He relocated to Ballston, where he knew A-SPAN was accessible and could provide some resources. A-SPAN connected Jeremy to a social worker, food, and eventually the opportunity to live at the Marbella Apartments.

“It’s hard to clean up, hold a job, and be able to wash your clothes without housing,” he said, wearing an ironed, sky-blue collared shirt. “I appreciated being close to the Metro, grocery stores, and possible job places before I had a car.”

Today, Jeremy owns his own car and works seven days a week. He drives for ridesharing companies on weekdays and works for the Cheesecake Factory on weekends. Even when he isn’t working, he’s likely still on the road, driving to his next camping or cycling trip

“I enjoy living here, and my family is close by,” he said. “They live nearby down south.” Now that his life has stabilized, he is looking for a new job. He is actively applying to jobs at the Census Bureau where he hopes to make use of his computer information system degree. “I’m ready for change,” he said, looking forward to the next stage of his life.

* Jeremy is not his real name; it is changed at his request.