Mark B.’s commitment to serving others hasn’t switched off since he left the Air Force in 1986. Although he is no longer “Active Duty” by military standards, the description is still fitting for a man who is active in his community and dutiful in helping others. This year, Mark is volunteering at the Veteran’s Resource Fair hosted by the Disabled Veterans National Foundation. He went to the event last year as an attendee, but ended up helping anyway. Mark speaks about his experience there enthusiastically, “last year when I went, I stayed for the entire day and loved it.” Due to illness, Mark can’t lift heavy boxes, but it doesn’t seem to slow him down. The event starts at 6am and this year he will make the drive from his Columbia Grove apartment to Silver Spring, Maryland to be there. 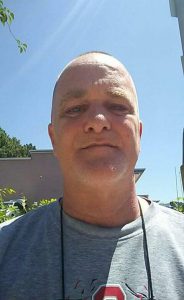 When Mark is not helping others, he is either spending time with his son, going to museums, or cheering at baseball games. He has lived in APAH’s Columbia Grove apartment complex since 2017. “I love the quality of life in Arlington,” he says. He also appreciates that everywhere is Metro or Arlington Transit accessible. Prior to moving into his apartment in Columbia Grove, Mark lived in a homeless shelter run by Arlington Street People’s Assistance Network (A-SPAN). While living there for a year, an A-SPAN caseworker told him about a housing program for homeless veterans in Arlington County. That’s how Mark was first connected to APAH and the Veteran’s Administration. These organizations have changed the course of his life. The Veteran’s Administration has categorized Mark as 70% disabled, so he gets a modest check every month from them.

He was excited when he found out he was able to move into his APAH apartment, especially because he could eat whatever he wanted, whenever he wanted. He’s taken full advantage of his kitchen by cooking dishes like pot roast with potatoes and corn as well as his award winning chili. Every week Mark goes to an Arlington Food Assistance Center (AFAC) distribution to stock up on food items. When he doesn’t cook, his son does, and the talent for cooking runs in the family. Mark didn’t know about his son until five years ago, and yet he didn’t even have to teach him how to cook the chili, he learned it on his own.

Cooking for his dad is just one of the many ways that Mark’s son takes care of him. Last year, when Mark got sick and had to stay in the hospital, his son took care of everything. His son continues to support Mark and visits his apartment daily to spend time with him. His son is not much older than he was when he left the military, but his maturity impresses him.

The military made a lasting impact on Mark. It gave him “life experience” and taught him the importance of “learning and respect”. He said enlisting in the military enabled him to see parts of the country that he never would have seen. One of those places he never would have visited – and probably will never visit again – is Minot, North Dakota.

“The first week I got there, the temperature got 100 degrees below zero,” Mark remembers. The two main things he recalls about his time there are that it was freezing and everything closed at 6pm. Growing up in Maryland, Mark found it shocking to be shipped there after spending his 18th birthday in basic training. As soon as his time was up in the military, he traveled around and spent time in Maryland, Georgia, Florida, and Ohio. Eventually he settled in Virginia.

Despite having Multiple Sclerosis and overcoming different challenges in life, Mark was adamant that he didn’t want his story to sound sad. It is very unlikely that anyone who spends time with Mark will be sad given that he has a great sense of humor. His favorite football team is the Cleveland Browns, but he’s willing to crack lots of jokes at their expense.

All jokes aside, his commitment to his team and helping others is serious. “I’ve got to wear my jersey every game and take it off once the game is over,” he says. While Mark lived in Ohio, he did charity work for the Cleveland Browns. But now he calls Arlington home and his loyalty to Arlington runs deep. “Thank you, APAH, for everything you do.” He counts AFAC, APAH, and his son as blessings.

With special thanks to volunteer Sola Ayodeji for authoring this story.