Ted is a seven year resident of APAH’s Parc Rosslyn. He is quick to smile, and articulate without hesitation. Ted embodies leadership.

Ted’s first home in Arlington, after graduating college, was in the Arna Valley neighborhood off of S. Glebe Road, where he lived for eleven years. While he was in this area, he was the civic association president and sought change in his neighborhood. Arna Valley had especially high rates of crime and lacked accessible health care. Seeing an opportunity, Ted sought to address the community’s needs by working with local organizations to fundraise and  open a satellite location for Arlington Free Clinic – still in its infancy. When the clinic opened in 1995, the neighborhood had access to health care once night a week. He even paid local youth to help visiting Nicaraguan artist, Jorge Somarriba, to paint a bright mural with Latino themes nearby, representative of the immigrant populations that lived in Arna Valley. 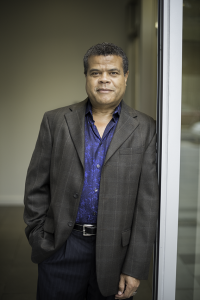 Ted is African-American, and his roots in community engagement began at a very young age. When he was just was six years old, he was named a plaintiff in a lawsuit to desegregate Girard College, a preparatory school in Philadelphia founded by Stephen Girard. Stephen Girard was a French-born gentleman who settled in the United States as a young adult. He financed the War of 1812 and was the first private banker in the United States. In his will, he founded Girard College, a preparatory school intended for poor, young white orphans.

Girard College was ordered to desegregate by the US Supreme Court 1954 legal decision, but the legal battle continued aggressively as the school resisted. Cecil B. Moore, president of the Philadelphia NAACP and a mentor to Ted, led the Philadelphia Freedom Fighters around the campus wall for seven months in 1965. In August of 1965, Dr. Martin Luther King Junior attended the protest, where Ted Hicks also participated as a prospective student.

“You’re doing this on behalf of your people”, Dr. King told him personally, that day.

Ted agreed to apply. As both a plaintiff and applicant, Ted took innumerable psychological, academic, and medical tests, many of which were not administered to white applicants. Anything to disqualify his enrollment at the school.

Attending the school wasn’t easy, Ted recalls, saying that he can’t imagine putting a child as a poster for a movement today. “The things that they put us through would be considered child abuse,” he says. He was regularly insulted, and students bullied him with racial epithets and threats. “I received death threats on my home phone number as a 6 year-old,” he recalled grimly about his time as a plaintiff.

Ted acknowledges his difficulties, but still saw hope for future generations of African-American students. “I saw a higher calling,” he said of his experience. He stayed at the school until graduation – for nine years – and was determined to give no one a reason to doubt him.

He received the highest marks on all of his examinations and graduated the school’s first African-American valedictorian. Despite his academic accomplishments, his classmates continued to deride him by calling him names, like “Webster” after the dictionary, which he used as fuel for his ambition.

Although his time at Girard was difficult, he still views his time there as beneficial.

“I was fortunate because I was able to travel all over the world, thanks to Girard College. I knew the world was larger.”

Thanks to the experiences of his primary education, Ted was awarded a full scholarship to Georgetown Universities’ School of Foreign Service. Although he was also awarded a scholarship to Stanford, he chose to remain in the East Coast.

For the next several decades, Ted worked in a variety of professions. His experience expanded from working for IBM, starting an international business where he acquired limited edition African artwork, to working on political direct mail, including a Get Out The Vote (GOTV) campaign for Bill Clinton. He is most proud of his work editing six self-help books that were published and sold to a variety of audiences. But community organizing and leadership kept calling his name.

He moved into the world of affordable housing when he felt that the rising cost of housing in Arlington would cause him to become uprooted. He served on the Arlington Housing Commission. He also began working with the property manager at Arna Valley View apartments. Together they created programs for residents including a community garden, community murals, job training and computer courses. His drive stems from his desire to give back to his community and to work for a cause greater than himself. He even now serves on APAH’s Board of Directors.

“I stand on the shoulders of my mentors and the future generation will stand on mine.”

When asked who inspires him, he is quick to give acknowledgement to his mentors Cecil Moore, William T. Coleman Jr., and Martin Luther King Jr. They all imparted on him the urgency and need to do the absolute best he could be. He heeded their advice wisely, being the first African-American child at Girard College, graduating a valedictorian, and being awarded a scholarship to two prestigious ivy league universities. He’s dedicated his life to the service of others. When asked what advice would he give to a young, up and coming community organizer he responds, “choose carefully what you do for community activism because it will become your life.”

Today, Ted sees some effect from his work. He appreciates Parc Rosslyn’s diversity and being able to live with immigrants and neighbors of different ethnicities.